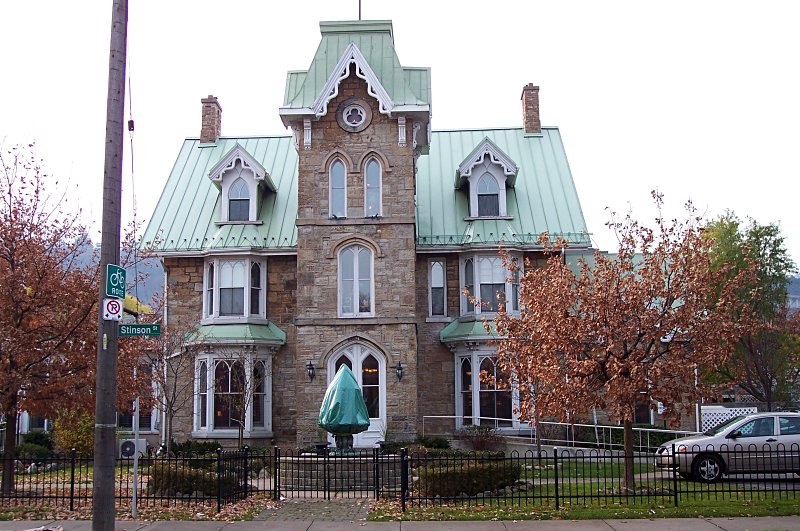 The substantial stone residence at 90 Stinson Street was built in 1862 for Frederick W. Fearman and was later enlarged in 1875 and 1890. Today, with its prominent three-storey entrance tower marking the head of East Avenue South, this commanding Victorian mansion stands out as an important neighbourhood landmark and as one of the city’s finest stone mansions erected in the pre-Confederation era.

When constructed, the home was situated on an acre of land near the south-east limits of the city, almost a mile from its centre. The house occupied a scenic location at the foot of the mountain, with a vista overlooking the open fields to the bay beyond.

By the 1890s, urban development had spread eastward, encompassing the Fearman property, and transforming the area into a prosperous residential neighbourhood. The entrance lane to 90 Stinson Street had by then become a tree-lined avenue of stately Victorian homes. The vista up East Avenue toward the dominating entrance tower of the Fearman home (a feature which enhances the impact of both streetscape and mansion) is one of the few examples left in the city of a once prevalent Victorian urban form.

In the late nineteenth century, major public buildings were situated in the immediate area; in 1876, the Hamilton Boys Home, featuring a central clock tower, was located one block east of the Fearman House on Stinson Street; in 1895 the Stinson Street School was erected five blocks to the east; and in the following year the new Central Collegiate Institute, an extraordinary, monumental structure resembling Toronto’s old City Hall, dominated the neighbourhood from its site one block to the west at Victoria and Hunter Streets.

Frederick W. Fearman’s house is considered a true product of the Victorian era, built in stages from 1863 to 1890, as his architectural tastes and circumstances changed. Its pre-Confederation origin is indicated by the use of local stone, which was rarely employed in Hamilton for houses after the 1860s. Stylistically, 90 Stinson Street displays the hallmarks of the popular Gothic Revival style; pointed lancet windows, a steeply pitched roofline with dormers, and decorative bargeboard at the gable ends.

Later, and with considerable finesse, an imposing central entrance tower of combined Italianate and Gothic derivations was appended to the front facade of the original home, transforming it into a highly fashionable Victorian mansion, appropriate to Fearman’s growing economic and social status. “Ivey Lodge”, as it was known, was originally established with look-out balconies on the tower, shut-ters on the upstairs windows, and a charming landscaped garden with climbing vines. Today, 90 Stinson Street retains most of its original features and is unique among the mansions inherited from Hamilton’s pioneering industrialists.

Original owner Frederick William Fearman built his stone house on Stinson Street when he was thirty-eight years old and still working as a grocer and meat curer in the downtown. He was to live in the same home for another forty-three years, during which time he bought a small meat-packing company at Rebecca and Wellington Streets and developed it into one of the foremost packing houses in Canada. Fearman is credited with pioneering new techniques and organizing all meat-packing operations for the first time into one plant. His “Star Brand” products were shipped from a railway siding off the Grand Trunk Railway on Ferguson Avenue and distributed all across North America, and eventually to the Caribbean and Europe.

Not only was F. W. Fearman a founding member of the Pork Packers’ Association, but he also provided local civic leadership as a member of City Council, Hamilton Public Library, Board of Education (1867-84), Public Parks Board, and Wentworth Historical Society. Present-day evidence of his public works contributions includes the City’s Waterworks, the tree-planting program for city streets, and the purchase of Dundurn Castle by the City in 1899. The Fearman family occupied 90 Stinson Street for a total of sixty-three years until 1926 when Robert S. Hart purchased the premises.