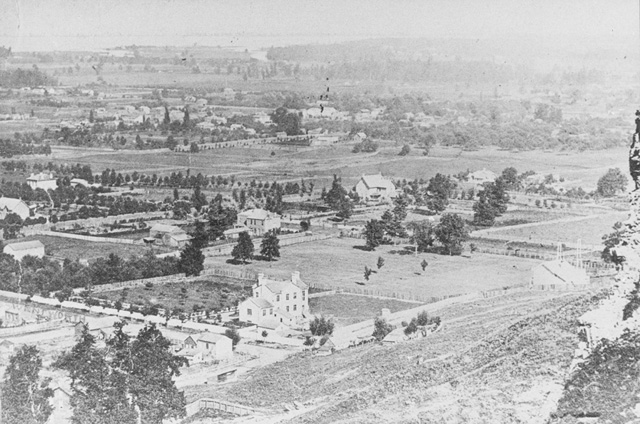 Did you know that the neighbourhood of Stinson is named after Thomas Stinson?

Thomas was born in 1798 near Drum, County Monaghan, Ireland. At the age of 24, he mi-grated to North America, settling into the Clinton Township in the Niagara Peninsula.

In a few short years, he married Margaret Zimmerman, the daughter of a Loyalist from the Beamsville area.
Thomas and Margaret moved to Hamilton in 1830. The Stinsons established a dry goods, grocery, hardware and crockery business on King Street East in the “Stinson Block”, the first brick business block in Hamilton.

Thomas was also an extensive land owner and one of Hamilton’s earliest subdividers. That was a clear indication he was a well-established member of society. He possibly knew Allan MacNab who became the Premier of the Province of Canada (1854-1856) as he was a subdivider also and responsible for early surveys of land. One record shows that

Thomas Stinson built 41 homes on his lots and rented them to Hamilton’s working class.

Stinson also established the Stinson Bank in 1847 on the corner of James and King William Streets. It remained until 1900.

He died March 13, 1864 in Hamilton and is buried in the Stinson Family tomb in the Hamilton Cemetery. It is an ornate concrete struc-ture over 15 feet high.

A grocer and politician, in 1830 he established his first hardware store.  In 1833 he was elected to the ward 2 Board of Police.