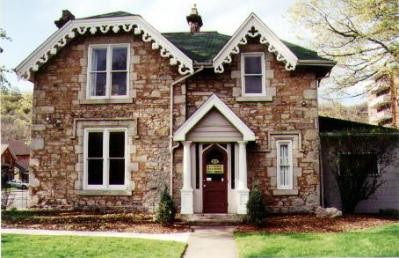 The beautiful limestone and gingerboard manor house at 118 Stinson St. has seen much throughout its history.

The land was originally owned by Ephrain Land, who bought the property in 1804. He sold some of the neighbouring lots to Charles Anderson. Mr. Land built the house around 1845. It is part free- and part dress-stone with a complex gabled roof. The windows are mostly simple, but there are a few gothic and bay windows.

By the door are sidelights and a partial transom. The walls of the house are 24 inches (60 cm) thick, with double wall construction. The house had 5 fireplaces on the main floor, and one upstairs. The servants’ quarters were located in the basement, along with the kitchen.

The house was sold in the Victorian era to a Mr. Martin, who was an officer in the T.H.& B. Railway. After Mr. Martin’s tenure, the house was used as a church from 1949 to 1978. It was called “Old Catholic Chruch” or “St. Michael Priory” during this time

It was in 1978 that Dr. June Chithalen purchased the building, converting the main floor to dental offices and the upper floor to an apartment. The dental practice is currently carried on by his son Dr. E. Jan Chithalen.