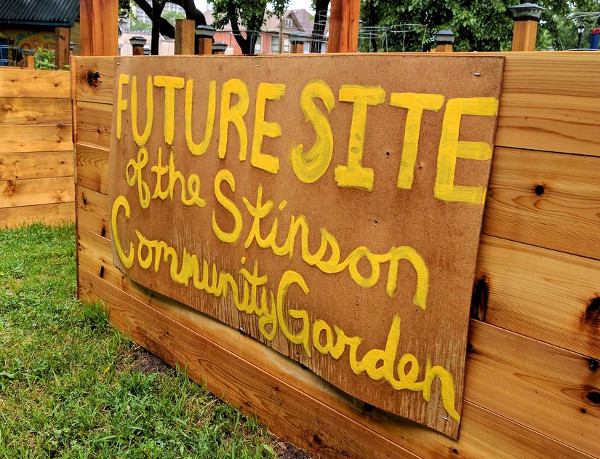 If we are ever going to turn around climate change, we need to be able to re-learn how to have fun with one another and derive fulfillment from simple experiences.

‘Change happens in the smallest, obscure and unlikely places’. The first time I heard the saying I did not believe it – to me this saying was just another piece of flashy jargon that gets thrown around to inspire people to make change.

I must admit, though, that the saying does appeal to me because I aspire to make sustainable change through food. For me, food is a great way to combat climate change because it is a daily activity we participate in that can either work with or against the planet.

I believe it is remarkably empowering for us to have an immediate and personal contribution in helping our planet’s condition simply by changing what we eat – and if we switch to eating tastier food, we are laughing!

In January I went to a McMaster University grant-writing session, organized by Change Camp, in hopes of making change. My mission at Change Camp was to get advice on how to write a stellar grant application in order to get funds to help create a permaculture garden at McMaster.

Permaculture is a sustainable agricultural design that replicates nature to produce food, but a proper story on permaculture deserves more time to explain, so we will endeavour into this topic at another time.

I thought the grant-writing session would be bustling with swaths of young *bona fide& McMaster students with social change exuding from every pore. Instead, the cold, white-washed room held just five other people. The story of change happening in the most unlikely places started taking shape before my eyes!

While I was quickly jotting down every point on how to write a successful grant, a tall man busted into the room. His name was Karl Andrus and he is the Co-chair of the Stinson Community Association.

It was quite serendipitous for Karl and me to meet at Change Camp, because he was there to seek grant money to help build a community garden in Stinson so neighbuorhood residents could have a greater source of healthy local food.

Grant-writing can be an excruciating and laborious process that requires lots of pasta eating, but my experience was smooth sailing because my amazing supervisor, Dr. Chad Harvey, was with me every step of the way and somehow took my jumbled words and complied them into a terrific grant application.

In addition to this, Dave Heidebrecht, manger of McMaster’s Office of Community Engagement, played an invaluable role in guiding me how to take the similarities of McMaster and Stinson and to pare them into the grant proposal.

Finally, there is the one and only Kate Whalen who mentored me in this project (along with many others) and made me understand why it was so important for McMaster and Stinson to be working together to create a better food system.

I can definitively say that without these wonderful people I would never have been able to write the proposal, let alone be the successful recipient of a $1,000 Change Camp grant.

This serves as a key lesson in making change: seek the insight of others, as it provides one with a much more developed, nuanced perspective. Also, young change makers should always ask for help, as they will be continuously surprised with resounding responses, and this will allow for them to stretch their wings very far.

We do not need to be reminded that Stinson is a “Code Red” neighbourhood, with significant levels of poverty and inequality. One factor in the neighbourhood that is causing adverse health effects is food insecurity.

The beautiful thing that I experienced this weekend while in Stinson building the garden beds is that change making has a tasty byproduct and that is interaction and relationship building. When we were moving a ton of soil and 250 pounds of gravel, lifting cinder blocks, levelling the land and building 12 garden beds, we were not thinking about the heavy work. Rather, we were in euphoric joy of being with each other and getting to know one another.

We were laughing at how it was supposed to thunderstorm all Sunday, even though all we saw was sunshine. We were joking about how one of the residents would not divulge his secret French toast recipe.

It was delightful to see how some of the younger children from Stinson thought the pile of dirt was mountain of snow that required climbing. Some of the McMaster student volunteers made pizza sandwiches because one slice at a time was not enough to satisfy their hunger after building the garden beds.

We constantly encountered massive pieces of buried asphalt in the ground that were not enough to stop us from building the community garden.

What happened in Stinson this past weekend was a marvellous thing. Most people assume change-making is a chore, yet in Stinson the ‘job’ of making change quickly blurred into an activity of forming social bonds, having fun and feeling like we were a part of something indestructible.

People are meant to be together and engage with one another, as we are creatures of social interaction. Sadly, we have lost our way, as we have largely been disconnected from real face-to-face engagement and community participation. Instead, we have become hooked on the material world and superficial fictitious commodities.

If we are ever going to turn around climate change, we need to be able to re-learn how to have fun with one another and derive fulfillment from simple experiences instead of complex items.

Or put in other words, when we think of climate change and the alleged journey of self-sacrifice and drudgery we must undergo to combat it, we can change the tune to this song by understanding that when we participate in change we unlock the greatest and meaningful social experiences.

Building the community garden in Stinson taught me that change is not good just because of the final product. Instead, making change taught me that what our world needs just so happens to be a great deal of fun – we just need to give it a shot.

Change is in All of Us

The final lesson of change I have learned is that change is in all of us because we all have energy and effort within us. Having this means that we have potential to make change anytime we want.

It was confirmed that some sort of change on some level was made this past weekend in Stinson because Karl told me that building the community garden “is a something for Stinson”.

Providing anyone with the opportunity to have something to improve their condition should get use electrified with excitement because to be in a position to give to others allows for us to express our humanity.

It was a privilege for me to see a space literally transformed from spotty grass to a community garden that will grow food, educate people on food and act as a hub for inclusiveness.

Dr. Harvey, Dave, Kate and most importantly Karl – thank you for taking a wild, young and inexperienced person like myself and allowing me to be part of the unforgettable experience of building the community garden in Stinson.

And to answer the question at the beginning, indeed change does happen in the smallest and oddest places, so next time you see the slightest chance of making change arise, just jump on it. My only advice is: be ready to have fun!

Originally posted to Raise The Hammer